Recently, while surfing on YouTube, I discovered a video game about building and creating a town in the middle of a body of water called Townscaper. Architecture is a fair love of mine. I focused on it with my photography (Did I ever mention I used to be a professional photographer?), and exploring architecture online helps bring me peace when I’m dealing with stress and anxiety. Anyway, the game looked fun, especially to me because it didn’t have any time limits or challenges with other players and such, it left you free to be creative and build as much as you might want in just about any configuration within the limitations of the game’s design, of course.

So I looked at my my husband and told him I wanted the game but didn’t know where to find it. Unlike my husband, I don’t play a lot of video games (can you tell?) in general. He told me to look on Steam, so I did and there it was! *sound of a chorus of angels* I created my account and immediately purchased Townscaper. I was NOT disappointed. It was exactly what I had hoped it would be!

Since this was my first time on Steam I took a look around to see what other games looked of interest. I found a few more games to add to my library.

Of the newer games I found Kari.

Explore mysterious lands after a magical storm strands you on the shore of Vanaheim. Seek out help from the gods inspired by Norse Mythology in a Singleplayer Combat-Free Adventure-Puzzle Game. A game about helping each other, Kari is developed by students from BUas.

I also found one called Signs of the Sojourner

In this narrative card game about relationships and communication, navigate conversations in a colorful world reminiscent of our own. Learn and grow through the cards you choose to play. Who will you become? What will you leave behind?

They both look like fun and I look forward to playing them.

I found a handful of older games that also look fun: Botanicula, Mini Metro, Cattails: Become a Cat, A Short Hike, Neon Beats and Montaro RE. I’ll get to each one as time permits.

And then, I found a game that I could not believe…

To be fair, the guy playing this game is what makes this worth the time to watch. He’s freakin’ hilarious! The game, however, is definitely not of interest for me, but his narration while playing the game is awesome.

If the title doesn’t make it clear, let me just say: NSFW!

I have been at the table during some of the strangest conversations about games ever. (EVER! Probably because Seth was there.) How… why… what were the designers of this game thinking (or on) when they decided to go forth and make this game?

Enjoy your nightmares after watching that last video.

A couple of folks that I know have recently created Kickstarter projects.

What is Kickstarter you ask? Well, according to their website:

Kickstarter is a new way to fund creative projects.

We’re a home for everything from films, games, and music to art, design, and technology. Kickstarter is full of projects, big and small, that are brought to life through the direct support of people like you. Since our launch in 2009, more than 3.7 million people have pledged over $554 million, funding more than 38,000 creative projects. Thousands of creative projects are raising funds on Kickstarter right now.

Each project is independently created.

The filmmakers, musicians, artists, and designers you see on Kickstarter have complete control over and responsibility for their projects. Kickstarter is a platform and a resource; we’re not involved in the development of the projects themselves. Anyone can launch a project on Kickstarter as long as it meets our guidelines.

Project creators set a funding goal and deadline. If people like a project, they can pledge money to make it happen. Funding on Kickstarter is all-or-nothing — projects must reach their funding goals to receive any money. All-or-nothing funding might seem scary, but it’s amazingly effective in creating momentum and rallying people around an idea. To date, an impressive 44% of projects have reached their funding goals.

Though I am actively pagan and fairly witchy, I’m also rather geeky and hang out with some seriously awesome geeky friends. (Notice my screen name MistressPrime? Think Transformers.) Heck, my own husband-to-be is quite the über geek. It’s part of what attracted me to him!

So my friend Rustyn Sa put together a Kickstarter project to manufacture FUDGE dice titled: Fudge it! Fudge Dice Infusion. The name “FUDGE” was once an acronym for Freeform Universal Donated Gaming Engine. These are dice with an equal number of plus (+), minus (-) symbols, or blank on each side of a 6 sided die.

As part of her project presentation Rustyn made a very entertaining video.
FUDGE DICE INFUSION VIDEO

*Dice not guaranteed to get you laid.

Very annoyed… can’t get the video code to stay in the post. Every time I update it disappears!

Check out the video, it’s quite funny! 🙂

Magic’s Shadow is the first book in a trilogy. It’s a fantasy story that revolves around the adventures of an unlikely group of five characters that fate has thrown together despite their differences. Provided that they can manage to not kill each other, the world should be ok – that is until another group of bad guys comes by and causes more problems.

An example of one of the main characters – Zavon 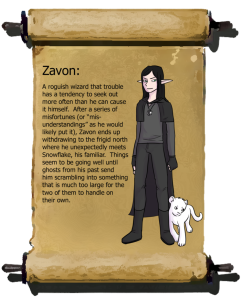 With both projects there are several levels of backing involvement to meet any budget. Every little bit helps get these projects closer to their goals!

Observations & Opinions from Outside the Broom Closet